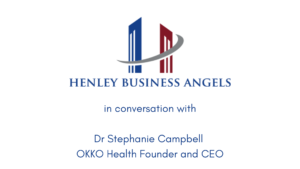 Henley Business Angels has invested in a number of companies whose ideas and business models excited our members, and after receiving a total investment of £145k from HBA members, OKKO Health has become our largest investment since our establishment in 2016. We sat down with CEO and Founder Dr Stephanie Campbell to find out more about the company, her experience applying to Henley Business Angels, and OKKO Health’s plans for the future.

What is OKKO Health?

At OKKO Health we develop smartphone software so that people who have eye disease can be monitored from home, resulting in less visits to hospital. Our analytics are designed to help in the early diagnosis of eye problems and their monitoring over time so that any deterioration detected can prompt the user to seek active treatment.

How did OKKO Health come to be?

I realised a gap existed between the amazing research and technology being developed in universities, and what was actually being delivered to patients who would really benefit from it. So OKKO is a platform to measure how the eyes work in such a way that the science can be rapidly translated into something that patients can use. By focusing on the needs of individuals, crowded waiting rooms and long waiting lists should be a thing of the past.

One of my own angels from Bristol directed me to Henley Business Angels and I was introduced to Jurek directly through email. The application process through Gust was straightforward, and being on the platform allowed a number of other investors outside my network to contact me. The Investment Readiness Workshop put on by you guys was also really useful, I felt like it truly helped me prepare for my presentation. It was a long day though – but worth it!

Any tips for people thinking of applying to HBA?

My top tip would be to have an organised, and complete, data room. It’s a really valuable tool for both investors and the entrepreneur. Another tip, and something I wish I had done, would be to have a firm closing date that’s a shorter period of time where the CEO can be fully involved and 100% focussed on talking with potential investors and building those relationships.

How many investors did you get from Henley Business Angels?

The health aspect definitely captured people as I had 6 investors in total from Henley Business Angels, down from 10 who were interested initially. The great thing too is that it’s not just money that you receive from investors in this network, it’s smart money, expertise, which I was really grateful for.

What was the end result of your funding round? What investment did you get overall?

I’m still in the process of closing with a few investors – even more reason I emphasise CEOs set themselves hard deadlines for discussions – but the maximum amount we’ll go up to will be £900k, I think. It may be a little lower, but it will be somewhere in between around £620k and £900k.

What are the ambitions for the future of OKKO Health, and what will happen by way of return do you think?

Our ambition at OKKO Health is to be the leading digital health provider of eyecare. We want to be the data company that underpins eyecare services, gathering data about the patient’s eyes and pushing it towards the practitioner that needs the information, whether that’s a GP, a specialist, optician, or even a local charity; we want to be the eyecare data intermediary and we want to have the best digital eyecare diagnostics.

When all these investments came in, did you have to deal with everyone individually, or did one act as the coordinator to you?

So we had a bit of both. My only feedback would be that nominating a lead person early on was really helpful. At the end of the day, however, if I didn’t have the one-to-ones with people like Carl, then I wouldn’t have known about the expertise that he could really bring, so I feel like I got to know people by doing the one-to-ones.

That’s something we’ll be looking at and encouraging more moving forward, nominating someone to take the lead.

I think for the entrepreneur, knowing what to expect, it’s really useful too. Different investment groups have different approaches, and sometimes the lack of coordination is a detriment, and it means investors sometimes lose out. However, having the flexibility that Henley Business Angels has, allows you to get to know the investors better through one-to-ones. My meetings with Carl, who was outside of the syndicate at Henley Business Angels, allowed us to develop a great working relationship and he’s now coming on as a hugely experienced advisor, which we’re really excited about. This diversity in approach, however, definitely emphasises the need for CEOs to wipe out their calendar for a two month period to encourage those kinds of conversations; that’s the most productive approach for everybody.

Did you specify an exit strategy, or are you just too early for that?

That’s such a good question. Digital health is an emerging market, and as a result is regulated, so we just don’t know what the regulations are going to look like in the future and what this means for acquisition. It’s fair game to say anybody could acquire us in our next three years, but I think there will be more regulation, especially surrounding data privacy. In my presentation I gave a slide to demonstrate the potential outcomes, which were: license and sell the technology; make and sell the product – which is what we’re doing now; or, have a very high value company that sells a service. We’re yet to make a decision on which route we would like to go down, so watch this space.