In Conversation With: Ed Upton, CEO and Founder of Littledata

03 Dec In Conversation With: Ed Upton, CEO and Founder of Littledata 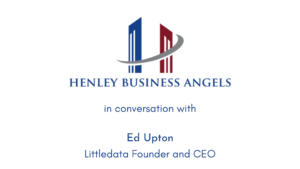 Henley Business Angels has a core focus on mentoring and coaching entrepreneurs, and after coaching we often receive applications from companies that have previously pitched and been unsuccessful. Littledata was a glowing example of success after a setback. Back in 2019, one of our members contributed to Littledata’s £80k funding round. Two years later, after the entire world moved their shopping habits online, we caught up with CEO and Founder, Ed Upton, to find out more about the company, their progress since Henley Business Angels’ investment and Littledata’s plans for the future.

Littledata helps online retailers understand how their website is performing, where their sales are coming from, and how to optimise their online store. We offer a data pipeline from Shopify, a very popular eCommerce platform, through to Google Analytics and increasing into other destinations, Segment, Facebook Ads and others. The problem we’re solving is that the stores find it very difficult to properly set up the tracking on their website to capture these customer touchpoints and understand how to improve their online marketing.

How did you come up with the idea of Littledata?

Six years ago I was working as a product consultant in London, working with some bigger eCommerce companies like Made.com, and they all seemed to have a similar problem. These companies were run by very smart people, but they had a constant problem with the nuts and bolts of capturing the right data points for them to then analyse. What was really painful for them, is that they would invest all this time and money into building a custom tracking implementation for their store using Google Tag Manager, and then it would break because they’d changed something about the layout of their online store and they wouldn’t notice for a couple of months. They’d go through this constant cycle where they never quite had fully accurate data to base their decisions on, so I realised that for even the larger online retailers to have this huge problem, and it created an opportunity for me to create a solution. After experimenting with the product, we found that on Shopify we could launch a truly self-serve, turn-key solution where these stores wouldn’t have to employ a consultant software developer to set all this up; they could actually just install our app on the Shopify store, authorise the data connections, and then everything they wanted to happen would be set up within minutes, not months.

We raised our first angel round at the beginning of 2018, and one of the angel investors at that point was Nick Pendleton, who is one of your most active members. We didn’t find Nick through HBA, we found him through another network in London, and his typical investments are in B2B SaaS companies, so he was interested and recommended that we should then pitch to Henley Business Angels. We first pitched HBA later in 2018, but we didn’t get any direct investors out of that, so our story is definitely one of ‘if at first you don’t succeed’, haha! We came back in 2019 and pitched again, with the updated story that we’d actually delivered on the growth we said we would, and were still growing. Certainly, in the last couple of years, the market dynamic has changed in our favour, rather than vice versa, so that was a huge benefit. After that second event, we had four or five investors interested, and from that, one more invested.

Our funding strategy has been little and often, so all of our funding is used for ‘hiring ahead of the curve’. What we do is use capital to accelerate our hiring plans so that we can make faster progress. Looking back to last year, I think we hired about 5 people, particularly in the product department side of the business, so that’s where the money from that funding round was spent.

It’s nice for a company to be able to say they hired people last year!

Yeah, I know! For anyone in eCommerce, it was boom time last year, not vice versa.

What are the future ambitions of Littledata?

Well, as I said Covid has accelerated a shift that was already happening to people buying more online. It has meant that there’s a larger share of marketing spent acquiring customers online, and a greater percentage of brands feel they must have a Direct-To-consumer (DTC) presence. All of that is driving the demand for our product, and the growth in the past years has been pretty consistent; we aim to grow at about 5-10% a month. In this quarter we’re launching on another eCommerce platform, BigCommerce, and we’re expanding the number of sources you can capture the data from. That is a general theme for us over the next couple of years: we want to be the eCommerce data platform, moving away from the dependence on one big software giant (Shopify) to having multiple partners in that space. And also expanding data destinations in terms of other marketing platforms, predominantly Facebook, that stores want to share their data with. Another huge theme we’re seeing in the market is that a lot of stores want to own their own data – they’re not content with just sharing it all with Facebook and Google – so we also want to focus on supporting brands’ own data warehouse.

What do you feel is Littledata’s biggest achievement to date?

That’s a good question actually. I think I’m just proud of the team that we’ve built.

This is my second business, and with my first company around 10 years ago, we raised some angel investment – not through HBA, but other syndicates – and I feel like we never got to the stage where we built a passionate team solving the problem. I was trying to conserve cash and do a lot with freelancers and outsourced developers, and that was the big mistake I wanted to correct with Littledata: that ultimately, the value created in a business is the people you can attract and the culture and spirit you can engender. So I’m proud of the fact we’ve now got a full-time team of 26 people, and everyone is excited to be doing what they’re doing, and they’re engaged in it.

I think that the exit strategy is still the same as it was, but probably better articulated now. When we pitched, we already said that we thought the likely exit was a sale to a larger software company. I think that’s still true, but then we were 6 years away from exit and now we’re probably 3 to 4 years away. We’ve got to a stage of actually identifying maybe a dozen companies, based in the US, who would acquire the business. Either they’re very interested in the eCommerce niche specifically, or they’re strong in eCommerce but want to add an analytics offering to that.

Have you ever worked in the pharmaceutical industry?

No, we explored all sorts of verticals to apply the technology to, and of course, all sorts of businesses have a similar need to understand where their customers are coming from. But as we’ve matured as a business we’ve realised that the way to get faster growth is to actually focus on one market. There was a great presentation at an event run by Episode 1, who are a VC based in London, called The Seed Stage, for seed-stage businesses. They explained how 10 use cases means no growth, 3 use cases leads to moderate growth, and nailing just 1 use case is how you get solid growth. We understand our one use case to be DTC brands with typically $1 to $50 million online turnover, and we know that they need the product, so the challenge is how we make them aware and get them buying into it. That’s our 100% focus, for now.

So what’s your turnover now then?

We’re ambivalent about whether we raise a Series A round next year. One of the great things about the angel investors that support us is that they’re a helpful network, but they’re not controlling. It’s really helpful to have engaged but not demanding capital, and I feel we’ve been able to set the strategy and they’ve supported us with it. Our concern around getting an institutional investor on board is having that power dynamic change, and it starts feeling like we’re working for them rather than them supporting us. Ultimately, we know our niche better than they do, we’re the experts in this field. We want our investor group to buy into that vision and support us, and that’s what our investor pool feels like now; we feel like they’re rooting for us and don’t expect to second-guess us on strategy. That’s what we love about our investors.

Of course, the more money you raise, the investment gets larger, that’s when they start dictating; saying you’ve told us about this target when’s this happening etc.

And that’s why in a way I feel that it’s viable for a business of our type to just raise larger and larger angel rounds, just going back to the market. There are no lumpy investment capital needs because running a software company isn’t a very capital intensive business. Every time we raise more capital, every nine or so months, the current investors put in a little bit more because they’re confident of the business growing, and we can add two or three more investors to that pool. I think that model has worked very well for us and I’d recommend it to other companies. I think there’s so much myth about closing an institutional round, that that’s going to solve all your problems, but talking to later-stage businesses that have done that has shown me it brings as many problems as it solves.

And obviously, angel investors will worry about being diluted.

Yeah, and I’ve got strong opinions on keeping a level playing field in terms of incentives for management and investors. We’ve always fought strongly to have one class of shares without all the ratchets and trickery you might do with a large investor. Last summer we had a deal on the table that we walked away from, with a US investor group that wanted to flip the company, move it to the US and have another class of shares. The current angel group of investors obviously felt very uncomfortable with it, and we felt that we would spend so much time and energy just negotiating with shareholders and trying to work out what was in our interest and what was in theirs, it would distract us from operating the company. At the moment, I’m just clear that if I win, the shareholders win in proportion to their shareholdings. I don’t want to have to try to figure out if that’s true anymore.