In Conversation With: Graham Gabie, Founder and CEO of SoundVault

25 Mar In Conversation With: Graham Gabie, Founder and CEO of SoundVault 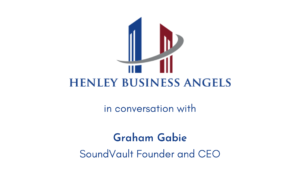 Music rights have always been a lucrative business, and finding a niche within this has been paramount in the success of SoundVault. Back in 2017, one Henley Business Angels member invested in this music technology company, and four years later, we sat down with Graham Gabie, the Founder and CEO to find out more about the company, their progress since, and SoundVault’s plan for the future.

SoundVault is a music technology company. We have specialised in building music technology in an area of the business called sync licensing, which is where music is added to film and TV, traditionally. Now our specialism is very much focused towards YouTube and social media uses of music through YouTube and the like; YouTube shorts etc.

How did SoundVault come to be?

It’s a very long story. My background was originally in the film industry making music videos and other videos, then I became more involved in web technologies, but very often around the music industry so those technologies around rights management, and reporting, primarily. I did some work for AcuSheet reporting system, which is utilised by Bloomberg and others, to report music usage in film and TV, and I realised just how poorly served the artists, labels and publishers were by the industry because of the industry’s inability to report music usage accurately. Effectively, I set up a new platform through which artists and labels promote their music for sync licensing and through which TV companies, film companies and advertisers could license music and then we would provide all the reporting in the background. Where that’s progressed is that today our main focus is YouTube where we manage the rights on behalf of publishers and recording labels on YouTube, managing content, ID’ing and collecting the revenues that are generated on YouTube. The focus of the business has slightly changed in the last 6 months, however, when we launched a music promotional platform that enables new artists, labels and managers to promote their music through thousands of influencers to their millions of viewers.

That has a new name, it’s called SyncVault.com, but it’s utilising a lot of the technology that we built in SoundVault with a new layer on top of that of technology. The main difference is that we pay YouTubers to promote music through their videos to their audience, rather than them paying us to use the music. This allows the bands and artists to develop their branding and expand their exposure, which in turn and in time, should lead to increased revenues through Spotify-type streaming services, and through utilisation through YouTube itself, through content ID collection.

I applied around 2016/2017 – it was pretty early on in your guys’ establishment. I presented and one of your guests made a small investment.

How did you find out about Henley Business Angels?

Well actually, someone who was involved with SoundVault was doing an MBA at Henley, so that’s kind of how it all came about. SoundVault was the main focus of his final thesis, and Henley Business Angels also helped us secure a grant through utilising your network and accessing one of your advisors.

It went into the pool to help us further develop the products we were building. Like any business, you have an idea, you build products, you test them, you put them to market, either it works or it doesn’t, you lose your lessons, you understand and you keep going. Over the years we’ve built a number of products and have gone on to build a sophisticated technical stack of music technology tools, which is serving us very well in SyncVault.

What are the future ambitions of SoundVault? Do you have any plans for another funding round coming up?

We are in the middle of a funding round right now, which we are just finishing up. With this particular project that we’ve been doing with SyncVault, we’ve gained quite a lot of traction in a short period of time. We’ve had in the region of around 3000 YouTubers sign up, 2500 videos using our music, and our monthly recurring revenue is growing at about 9% compound, which in June was around $60,000.

What we did is we decided to utilise part of what we were doing, which was the more traditional sync for film and TV, and kept that running and operational but moved into the YouTuber market after seeing a steady decline in that traditional market. I think the product that we have is very unique at the moment. We work with YouTubers and YouTube Partners, who are actually saying they’ve never seen anything like it. This round we’re closing now was for £1.5 million. We’ve secured just under a million on that, and we’ve got about £550,000 that we’re closing now. We anticipate that we will close that within the next month or two, with the aim to look at doing a Series A in Q4, which with the huge uptake in YouTube shorts showing us growth in the market around 20-25x, we anticipate that Series A will be between 2 and 4 million pounds.

Exit strategies change all the time, especially in the early days of business. You think you know where you’re going, then by the time you build some product and have tested it, taken it to the market and continued to build it, things change, the markets change. It’s very interesting at the present moment, in terms of the current product we are focusing on promoting music to YouTubers and as a music promotional service.

The key issue that we decided to focus on is that 60,000 new releases are uploaded to Spotify every single day, so how do you as an artist or a label get people to hear your music? When we started promoting music, we found that there was an opportunity, especially with our algorithms, to provide incredible value for money compared to any other agencies that might help you promote over Spotify. We built and tested the platform, have done very little marketing and it’s gained quite a lot of traction.

We are looking to grow the team quite significantly, and it’s really to elevate the management side of the team now, and then do another raise to expand the product to not just music, but to product placement in YouTube videos and YouTube Shorts – there’s a huge opportunity there. That’s really where we see the product evolving next year, 2022.

In terms of exit strategies, trade sale is the most likely route. Who might that be? Well, it might be with one of the social media platforms, we know that YouTube are watching what we do as partners and they’ve given us quite a lot of preferential support in that. But, it could also be through advertising agencies who want to break in and find new ways of breaking into new, emerging markets very cost-effectively. It could be the likes of Martin Sorrell, you know that type of organisation. There are multiple avenues there, but our focus at the moment is further developing the product.

Well as YouTube said themselves, they’ve not seen any platform like ours, there’s no competition as such in terms of what we’re doing at the present moment, as far as I’m aware of. There are agencies like Upfluence who will work with labels and do promotional campaigns with influencers through YouTubers, but by and large, they are charging. and the labels are paying, somewhere between $10 and $20 USD per 1000 views. Our algorithms are producing 1000 views for around about 20 cents.

That’s an interesting one. If you look at the market segmentation, we’re focusing firstly on YouTube. Our platform operates on all our proprietary technology, so I could move this technology to Facebook or Twitch, or to other platforms, but we’re a small business and what I want to do is make sure that I get it absolutely right on one platform first before we start spinning out to other platforms with different teams. If you look at the YouTuber segmentation, at the moment you’ve got about 175,000 YouTubers who have over 100,000 subscribers. Then if you look at the next tier down, I can’t remember the exact figure, but it’s roughly around a million that have between 10,000 to 100,000 subscribers, and then all the other accounts are below that. The addressable market of all the YouTubers is 31 million, but our interest is really between the top and middle tiers. The top tier gives us quite a lot of credibility, but the middle tier gives us more engagement. What we’ve found is the top tier have huge views, but they don’t necessarily have total engagement with the YouTuber themselves. The middle tier has lower views but the YouTuber is often more influential in that group, and that’s what really differentiates us. The top tier represents about 40% of our YouTubers on our platform, and the rest is the middle tier. The lower tiers can come and use the music for free, but they won’t get paid. That’s how we segment it: we have a free tier, a bronze tier and a silver tier, where the silver tier focuses on the top tier YouTubers.