In Conversation With: Sebastian Beres, Founder and CEO of Brikk

21 Jan In Conversation With: Sebastian Beres, Founder and CEO of Brikk 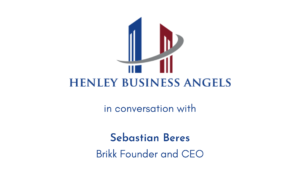 Brikk, a virtual approach to estate agency, pitched to Henley Business Angels in 2019, just before 2020 forced much of the world into the virtual sphere. Three members of Henley Business Angels saw the opportunity for such a company and invested in Brikk’s initial funding round alongside a number of other investors. Eighteen months on, and before coming back to pitch to Henley Business Angels for a second time in September 2021, Sebastian Beres, Founder and CEO of Brikk, say down with us to talk about the company’s progress since the last pitch, and their plans for the future.

Brikk is a digitally focused estate agency that focuses on giving property sellers, buyers and estate agents a significantly better user journey when selling their home, making it much more transparent, automatic, better and at a significantly lower price.

How did Brikk come to be? How did you come up with the idea?

Are you just in Denmark at the moment?

We are. We started in Denmark and had our first customers before 2019, and have grown quite quickly – we’re already within the Top 10 estate agencies in Denmark and we’re the fastest-selling and the best-rated estate agents in Denmark as well. We’re focusing on this market right now because there’s a massive market opportunity, but we have started looking at our internationalisation plans and have found there are potentially even bigger opportunities in other European countries.

It was quite some time ago now, I believe around 2 years ago. It was a positive outcome and I had a few investors from Henley Business Angels. It was a very positive process.

It was put into growth. What we’ve achieved over the past year is exactly what the investment was used for. We’ve put it into marketing and growing our team as well, so some elements of operational growth but primarily marketing.

And you’re raising another round right now, is that right?

Yes, that’s true. We’ve just started raising another round now, and we’re having some really interesting conversations. Obviously, it’s a very different company now with all the proof points, which makes it really exciting and we’re getting some very interested parties.

Have you got a deadline and a target for that at all or are you just seeing how it goes?

We’re in quite a special situation where we still have a lot of money in the bank. We’ve been growing close to profitability, which is always great, so we’re not desperate to raise any time soon. We’re obviously raising for a reason, though, and that’s because we want to push significantly more, faster. We’re looking to close this round within the next 4 months.

You’ve mentioned moving into international markets; are those the future ambitions of Brikk, moving into more countries across Europe?

Absolutely. The concept of digitally-focused estate agents – or online estate agents – is one that exists in the UK, and there are a lot of players in the UK. There’s also some in the US and in Germany, but there’s also a lot of countries where estate agencies work as they did 50 years ago. In those countries, if you have to pay 10-20,000 for a traditional estate agent, then suddenly switching to a digitally focused estate agent makes a lot of sense, and saves you a lot of money; much more than you can in the UK by switching to say, Purple Bricks, which is also why the opportunity for Brikk is really significant.

I think I did and there are still a few options. Purple Bricks, in the UK, IPO’d relatively early on, after 3 years, so that’s a definite option for us and one that we’re looking at, but there are also other exit targets. One of those is big banks. Regional banks and banks in European countries are incredibly interesting to us, as they often own estate agencies, so that’s a potential acquirer. Another route could be some of the traditional chains that want to go international, or digital, from a number of countries that could be interested in a company like Brikk. We have a few options in terms of exit when we decide it’s time.

Is there any relation between Brikk and the UK Company Purple Bricks?

Is the European market for buying and selling properties similar to that in the UK or do you find it’s less dynamic?

I think there are big differences within European countries. In Germany, it’s less dynamic for the population, whereas in Denmark people actually move more than they do in the UK. In a market like Poland, you would have 6,000 properties sold a year, making it a market of 40 million, so you still have significant amounts of transactions going on. However, I do think it’s true that in some countries the dynamics of selling and buying are different, and I think it’s a good point to focus on: that Brikk was really built to be international, both in terms of our technology, our processes, and our way of thinking. From growing businesses internationally before, we know that we have to be aware of those differences in dynamics, in culture, in usability, and in the legal parts as well, but we’ve built up a business exactly to do that and it’s a business that we have under control.

What sort of turnover do you have at the moment?

We’re currently on a 2.2 million revenue run rate, so we’re doing about 250k a month and that’s at 1 year plus of operations.

Find out more about Brikk by heading over to their website, and follow them on Facebook and LinkedIn to stay up to date with the latest news and their progress.