In Conversation With: Tetiana Vynokurova, Co-Founder and ‘Head Dreamer’ of Supergood Bakery

25 Feb In Conversation With: Tetiana Vynokurova, Co-Founder and ‘Head Dreamer’ of Supergood Bakery 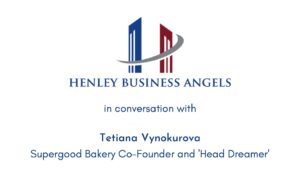 Henley Business Angels are always interested to hear from entrepreneurs that fill an undiscovered niche, and back in 2018, Supergood Bakery pitched to the group and received investment from one of our members. Three years, and a lot of baking later, we sat down with Tetiana Vynokurova, Co-Founder and ‘Head Dreamer’ of Supergood! to find out more about their company, their progress since Henley Business Angels’ investment, and their plans for the future.

What is Supergood Bakery?

We make free-from bakes and baking mixes that are free from gluten, dairy and are vegan friendly. We’re sold in a number of retailers across the UK, including Tesco, Asda, Morrison’s, Co-Op, and in the likes of Wholefoods, Planet Organic and Revital, as well as lots of independents across the country.

How did Supergood Bakery come to be? I saw on your website it was you and Ksenia in your London flat, but was there a particular mix you made that made you think this is it?

No, it was actually a combination of factors. My co-founder had been fasting a little while back, and there weren’t actually that many vegan-friendly and gluten-free alternatives on the market, barely any to be honest. We tried baking this lemon tart from this amateur baking blog and bought a lot of expensive ingredients, totalling around £30-£40 on all types of flour and sugar, and we made it and it tasted like cardboard, it was absolutely terrible. We thought surely there has to be some type of pre-mix that you can buy and you can get the same result every time, but nothing was available. We went to my local shop, which I think was Tesco back then where I lived, and the only thing available was Betty Crocker; so old school baking mixes that were full of chemicals, that you couldn’t make vegan, and that had really outdated branding. Back then, we felt like all the innovation was happening in snacking, and maybe a little bit in drinks, but nothing in the bakery aisle.

From then, we decided to try and give it a go, but we had no money to start it, so we knew we were going to have to make sales somehow to prove the concept. We started calling up independent stores across the UK, pretending to be an existing brand, telling them that we make healthy baking mixes that are gluten- and dairy-free. Those retailers asked us to send them a presentation and sample, which gave us a good indication of interest, and then once we actually made the product we drove around London, presenting it to those same independent stores we had called a month or so earlier, and they gladly took it. After that, we just kept expanding our listing and going from one independent to another. Then, we were listed with Selfridges, Ocado and Planet Organic; just moving onwards and upwards from that initial listing.

We raised our first funding round in 2018, so it would have been then. We had been doing Supergood Bakery for ourselves for a bit before that round, so by the time we applied we already had products, some sales, and a decent number of listings in the UK. We started raising our round and already had some angel investors on board, then I believe somebody recommended for us to apply to Henley Business Angels. We pitched and did a little demo at the investor event, and we got one investor out of it who is still with us. He then also took part in our subsequent funding round and introduced us to a colleague of his in the industry who invested in our next round too. Originally, from the event, we just got one investor but then he got his network involved as well, which is amazing.

That funding round was to help us gain new listings by helping us hire a salesperson. At the time, we were just a team of 2 and we were managing everything ourselves. With that money we could land new listings because some are paid for, so we were able to invest more money into sales and marketing.

How far have you come since you received investment from Henley Business Angels?

Really really far, haha! When we had raised in 2018, we only had 4 products and we were only available in the health food chains – the likes of Wholefoods and Planet Organic. I think we were also with Ocado by then, but we only had 4 products. Now we have a range of 9 baking mixes, and we have launched our first range of ready-made products, so we have 12 products in total, and we’re available in 4 major retailers nationwide. We also export even more, so we’ve come really far.

You’re stocked in a huge number of stores both online and physical; how did you find the journey of getting into those stockists? Do you feel the tide is turning towards vegan and healthier foods which made it easier or did you still need to do some convincing?

There’s always pushback, whether it was back then or now, it’s never particularly easy. It’s a healthier kind of product, but even back then people were interested because it was something new and different. There were obviously some people who were cautious, but I wouldn’t say it’s changed massively in the way people respond to the product range, it’s just that you need a lot of time and patience as the big listings take a very long time. On average, a supermarket listing can take 12, sometimes 18, months. The majority of our listings with the national supermarkets took over 18 months.

Are there any new products you’re coming out with that you’re excited about? Obviously, as the brand owner you’re going to be excited about all of them, but any in particular?

A major, major thing for us was launching our new range of brownie crisps on our website. We started working on them at the beginning of 2020, and we finally launched them in December of that year. They’re doing really, really well, so we’re going to be working on launching more ready-made products, but I can’t reveal what they’re going to be. We’re really excited about those because we’re doing something interesting and different and innovative in the industry.

So are you still pretty hands-on when it comes to designing the new products and trialling them and stuff like that?

Oh yeah. We’re still a very tiny team, and a huge thing for us internally is taking the product from concept to the recipe to the recipe test and trial ourselves. We still work on and do everything ourselves, yeah.

We’re looking to become the biggest challenger brand in ambient bakery in the UK and beyond.

The exit strategy for any brand is to be bought outright by somebody, and that’s probably what some investors want to hear, but then I think we are onto something really exciting, and we will keep doing this for as long as we can. We are incredibly passionate about what we do and we see that the potential is huge, so up until we have achieved the biggest thing we can achieve running it – just the two of us and our growing team – we’ll keep doing it.

That’s a really interesting story! Finally, what is your turnover so far?